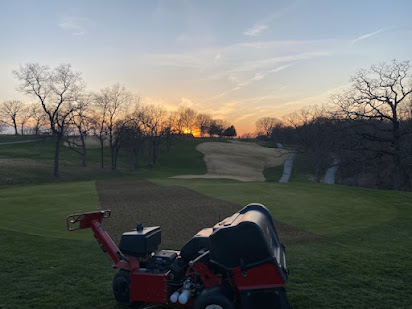 The season is almost upon us, again. It was a mild winter, but a winter none the less. Now that average temperatures are starting to rise, our greens were ready for their bi-annual aerification. This process relieves compaction in our greens, creates ventilation to our root zone, and promotes new healthy growth of our green's turf. 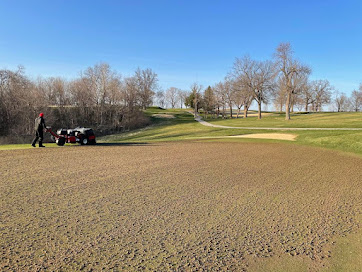 (Aerification on #10)
Aerification is one of our largest projects each year, however this year we were faced with another huge issue. Our main valve to the course, located on 9's fairway, broke as we were shutting down the system in December. We expect these repairs to be difficult, but nothing prepared us for the rats nest of issues that came with this problem. After 4 days of digging, a rented jackhammer attachment, and two sore backs, the valve was succesfully replaced and the course was able to charge up our irrigation system. 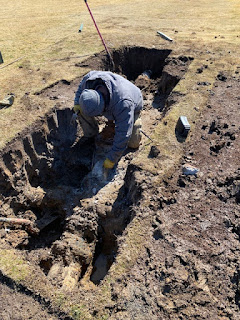 (Exposing the pipe and valve fitting.) 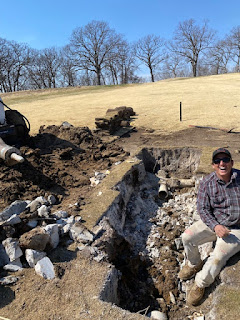 (Josh experiencing some delirium while chipping out a concrete patio that held the old valve in place.) 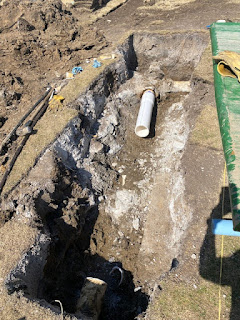 (Removed concrete and existing pipe along with broken valve.) 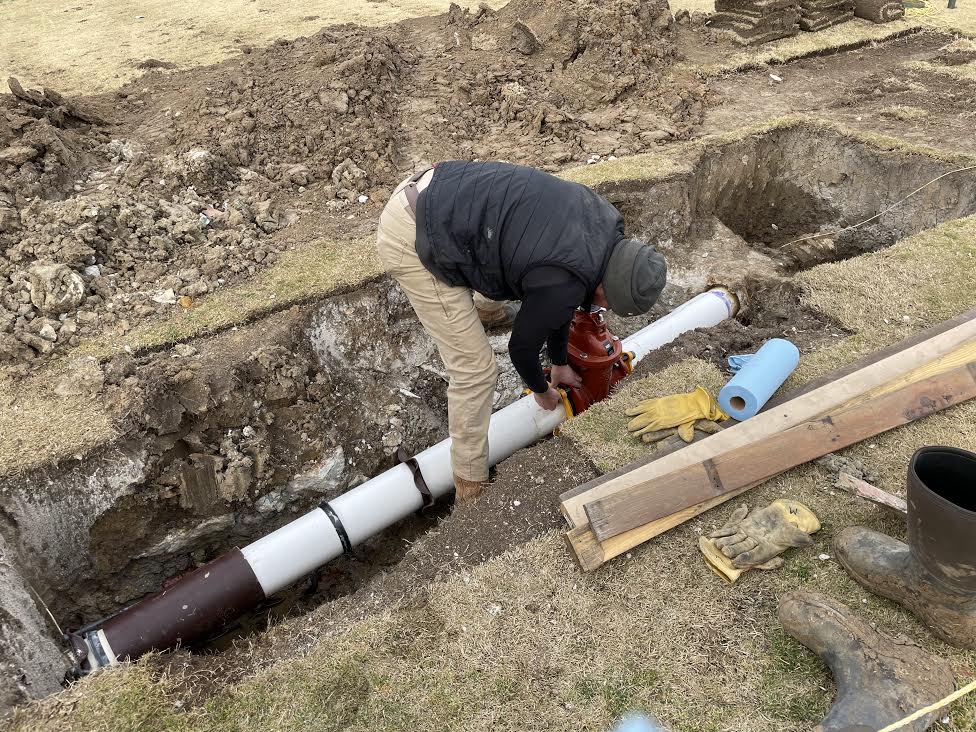 (Putting the finishing touches on the repair.)

Besides our two massive projects, we also were able to paint and put out our enter/exit signs on the course, paint and install our ball washers, and repaired a handful of cart path pot holes. 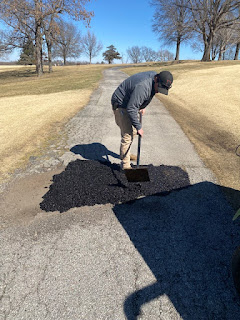 (Josh repairing hole on #5.)
We look forward to seeing you all on the course this season, and remember...
FIX YOUR DIVOTS! 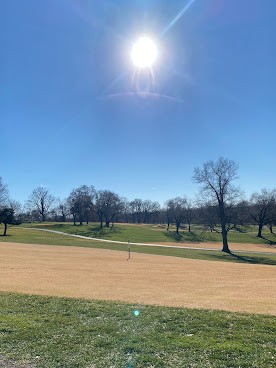 Is it December, is it March, is it June....who knows?!
First off, Merry Christmas and happy New Year to everyone, what a year it has been. I had completely given up on winter and started planning what my life was going to be like working year round with growing season weather. Luckily, I was able to quit planning. With this cold front coming in literally with the New Year, the course is finally ready to shut down. The difficulty with the warm temperatures this late in the season is that the turf doesn't know if it's time to start dormancy or continue using it's energy for growth. Therefore, we were throwing water up until the last week of December. Now that we have average temperatures in the 20's coming up, and with the winterizing (fertilizing/spraying) of the greens done, the course will be ready for its winter slumber. As will I. 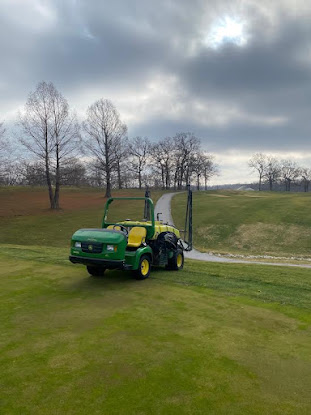 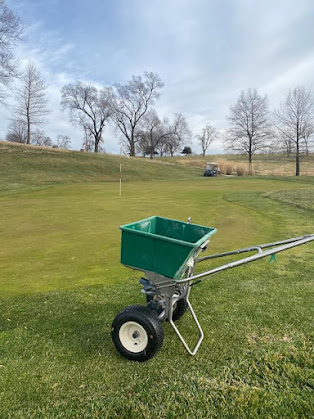 Fertilizing 15.
Before the cold set in, there were two applications that needed to be done to the greens. We put down a winter fertilizer. This will help the plant have nutrients to store throughout the winter, and to utilize once spring comes around. Secondly, we spray a wetting agent and a fungicide. The wetting agent will help disperse and filter down snow melt on the greens, and the PCNB fungicide will prevent snow mold and a handful of other fungi that appear in the spring. Snow mold appears after a green has been covered in deep snow for a prolonged period of time. Places like Colorado or Montana have a higher susceptibility to this issue, but besides protecting against that, it will suppress Wakia patch in the spring. Wakia patch are the little lime green circles that show up when the plant comes out of dormancy, it's simply and aesthetic issue, no turf death, but with the application of PCNB now it will improve our chances of avoiding it. 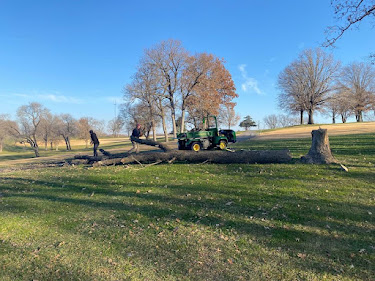 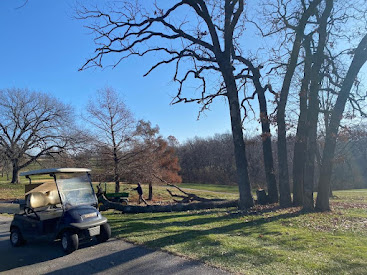 If you lived in the Midwest, you experienced one hell of  a wind storm mid-December. This knocked down trees and branches like the Chiefs knocking down everyone in the AFC West. We were lucky to only have a few large limbs and a couple trees on the periphery of the course. However, we have had some trees on the course that have been dead for a year or two, they constantly shed old limbs, causing continuous clean up throughout the season. We went ahead and removed 2 trees on #5 to the right of the second fairway, 2 trees on #9 near the front tee box, and 2 trees on #15 near the end of the fairway. These trees were oaks, so they were cut, split and stacked behind the shop after the smaller limbs were hauled off. 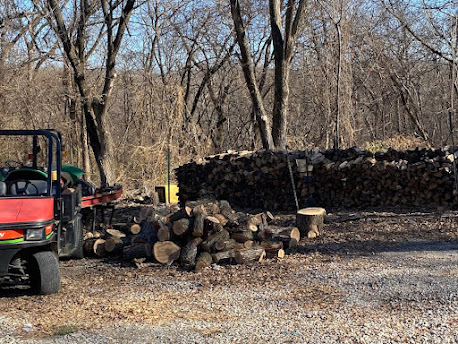 Always adding to the firewood pile.
We continue to sell firewood here at Swope, best deal in town as my loyal customers have told me!! If you or a friend has a wood burning stove, a fire-pit, or just like to burn wood, please come and buy a load. We sell it for $75 per truckload, or $100 if you want it delivered within reasonable distance. The money we make from this goes into our Carne Asada fund, so we can have a few Fridays during the season to relax as a crew and enjoy some grilled meat, a cold Corona, or an orange flavored Jalisco together. Shawshank's Andy Dufresne said it best: "I think a man working outdoors feels more like a man if he can have a bottle of suds."

Have a great New Years everyone and thank you for all your patronage throughout this long season. We expect to always push this course in a positive way and are proud to do so.
From June to January, 2021 to 2060, Fix your divots!!!!
Posted by Marshall at 8:38 AM No comments: 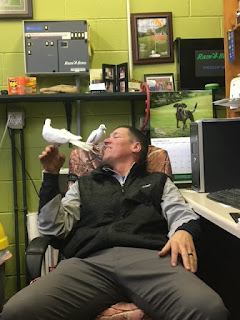 This blog will be slightly different than the ones I normally write. It also has a small sting to it. Swope's superintendent since 2017, Sam Bailey, has taken another job and is leaving us. Sam is taking the Superintendent position at Fred Arbanas Golf Course in Lee's Summit. Arbanas includes an 18 hole normal course, a 9 hole par 3, and a driving range, and no one is more deserving of this position than Sam. 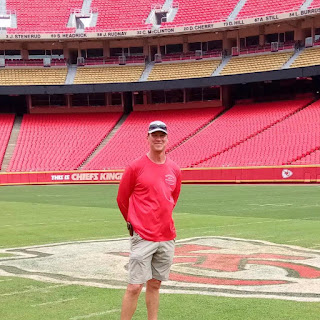 Sam started his KC career down at Heart of America in 2012, previously he was managing a 9 hole course in Nebraska. When the position for Swope opened up in 2017 he was an easy decision to replace the previous super. Each year, Swope continued to show improvement. Greens that were notorious for dying each season became playable again. Tree's were removed to create better airflow on certain greens. And to the disdain of many golfers, he grew out some bunker faces to pay homage to Tillinghast. 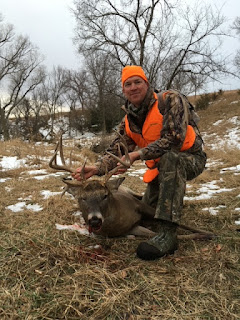 (Still not sure if he shot this.) 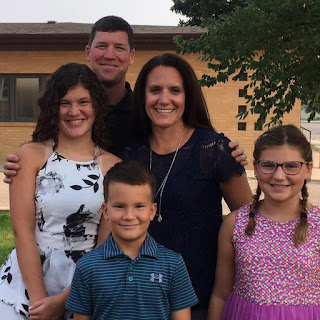 Sam has been an amazing mentor to myself, and I owe everything I've learned about this industry to him. He's an integral part of our team/family out here and  all of us here at Swope wish nothing but the best for Sam. He will always be welcomed back to play 18 holes, enjoy a cold beer, and lose a couple balls in the tall grass.

Don't forget to fix your divots at Arbanas. 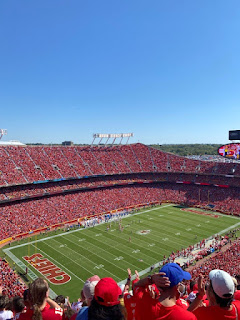 September gave summer it's last push, and it did a darn good job at that. It seems every year the heat lasts a week longer than the previous. This year was no exception. High 80's were present from the 1st to the 26th, making for a taxing month. However, as stated above, fall is here. 70 degree days, cool nights, and football. The course looks forward to this time of year, but so do I. Absolutely perfect weather for smacking a golf ball around and even better weather for football Sundays, (see picture above.) 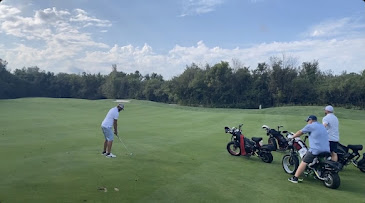 (Sam Marlin and our Harleys at Adam's Pointe.)

We were lucky enough to be able to compete in a tournament at Adam's Pointe this month. We being myself, Sam Marlin (HOA), David Carlson (Minor Park), and Matt Nash (Swope/HOA/Minor Mechanic). Swope is a city owned course, but is contracted out to a management company, Orion. Orion Management owns: Swope, Minor Park, Heart of America, Sycamore Ridge, Adam's Pointe, Winterstone, and more recently Excelsior Springs. Since we were all Orion employees, we were allowed to take out the motor-bike golf carts, the only group in the tournament I might smugly add. Golfing is already fun, but if you ever get the chance to ride one of these bad boys, say yes. The wind in your hair, silent hum of the electric engine, the open road er cart paths. It was all we could do to not buy some leather and head North to Sturgis. **Sam Marlin hit a hole in one; Hole #8, 165 yrds, 9 iron.** 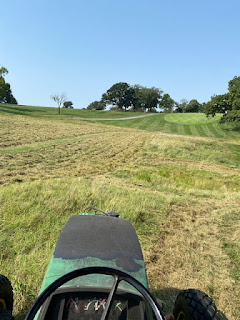 Nothing to exciting course wise this month. As we do every year, our native grass areas were knocked down, giving the course a cleaner look. 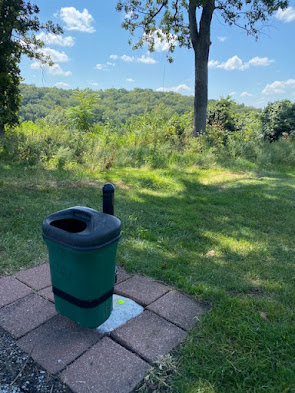 Someone was having a little too much fun and drove a cart over the trash can on #15 turn around. After a bag of cement and a new bracket it just may be the prettiest darn trash can on this side of the Mississippi. Check out that sweet neon golf ball in the concrete!

We will begin aerifying the course on October 5th, so some big days are ahead, but we are so thankful that Fall weather is here and look forward to improving the course every day. 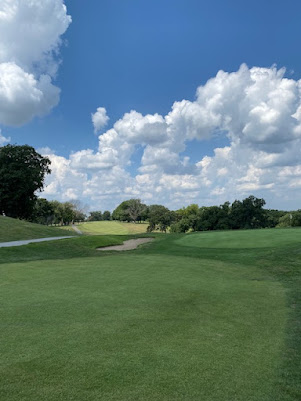 (It's a beaut, Clark!)
The end is finally in sight, and what a month it was to get here. August was brutal. The first and only rainstorm of the month, that has affected us, is happening as I write this on the 31st, and what a sweet sound it is. The course was beyond crispy, and our mental states were burnt out. Any precipitation we receive not only hydrates the turf, but helps our spirits. When mother nature gives us a break, we welcome it with open arms. August in its entirety was plain hot. A cool hour or two in the morning was soon forgotten as the temperatures rise to more than 90 day after day, making for a brutal afternoon. During stints of heat like this, its strictly survival mode. We mow in the morning and throw water every afternoon, a process when repeated for 20 plus days can wear a man down. To bring this paragraph full circle, this rain is a damn god send. 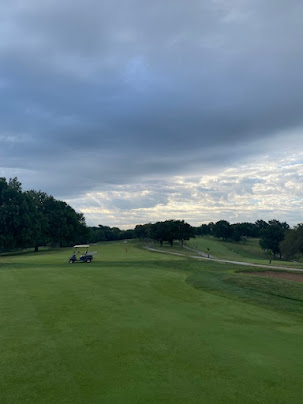 (Peaceful morning before the afternoon heat.) 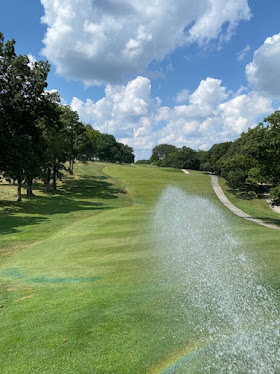 (A normal afternoon view of hand-watering greens.)
Changing it up, we got rid of two eye sore tree's on the periphery of holes 10 and 18. These trees were monsters; tall, wide, and deader than Thomas H. Swope. Because of their size, we had to bring in an independent contractor. SAFETY Tree Service out of Overland Park got the job done in two days, leaving nothing behind but tire tracks and wood chips. 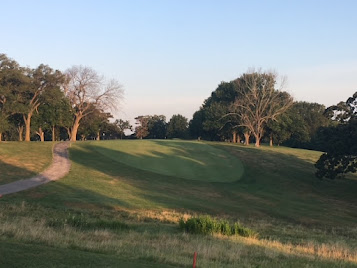 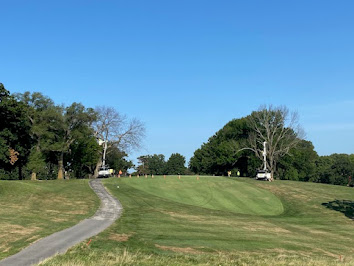 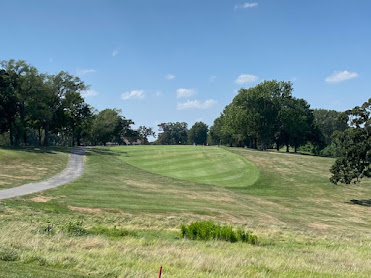 September is welcomed with open arms. Cooler weather, shorter days, and football; there really isn't anything more to say.